Absorption is the process in which a molecule is dissolved by a liquid or bulk of solid. In the case of bulk solid, solid is called absorbent. Adsorption is a process in which ion, molecule or atom of any substance get attached on the surface of any other substance which is called adsorbent. In absorption, the entire volume of the absorbing substance has involved while in case of adsorption, only the surface of the adsorbing body is involved. Both processes are ubiquitous in everyday life as well as in biological and chemical laboratories. 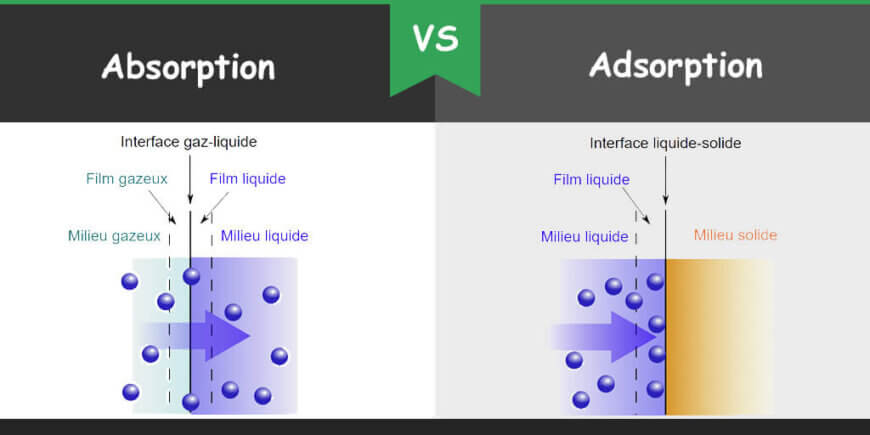 The absorption process can be seen everywhere from the absorption of food in the stomach to the industrial applications. Soaking of spilled milk through a paper towel is a common example of absorption. Absorption chillers for space cooling instruments, cold storage, ice production, turbine inlet cooling, etc are all examples of the absorption process. The process of gas absorption by a liquid is used in the carbonation of beverages and hydrogenation of oils.

Adsorption is a surface phenomenon in which a substance is accumulated in solid, gas or liquid form on the surface of another substance which may be in solid or liquid form. The substance which gets accumulated or adsorbed is called adsorbate while the substance on which the adsorbate accumulated is called adsorbent. Alumina gel, silica gel, zeolite, graphite, and activated carbon are some examples of adsorbents. The adsorption process is usually used to separate off a substance through another substance. Adsorbate is loosely held with the absorbent. This interaction can be either physisorption or chemisorption. In physisorption, attachment between the molecules is of weak van der Waal forces. In chemisorption, the interaction between the molecules is through a covalent bond. Desorption is the reverse process of adsorption in which the adsorbed molecules are removed from the surface of the adsorbent.

Adsorption process has many applications in industries for example adsorption chillers, air conditioning, water purification, and synthetic resin. Adsorption of molecules on the polymer surfaces are used in the development of non-stick coating and in some biomedical devices. In pharmaceutical industries, adsorption is used as a means to enhance neurological exposure of specific drugs. Similarly, activated charcoal is used to treat poisoning of some substances or overdose of drugs. Activated charcoal removes poisons through the adsorption process.

Key Differences between Absorption and Adsorption

In conclusion, both absorption and adsorption are slightly different from each other and occur in day to day life processes. So understanding their difference is essential.