Active and passive transport are two biological processes which are occurring all the time in the cells and body. These processes provide oxygen and other nutrients to the cells and remove waste materials from the body. But both processes differ from each other on the basis of gradient and expense of energy. 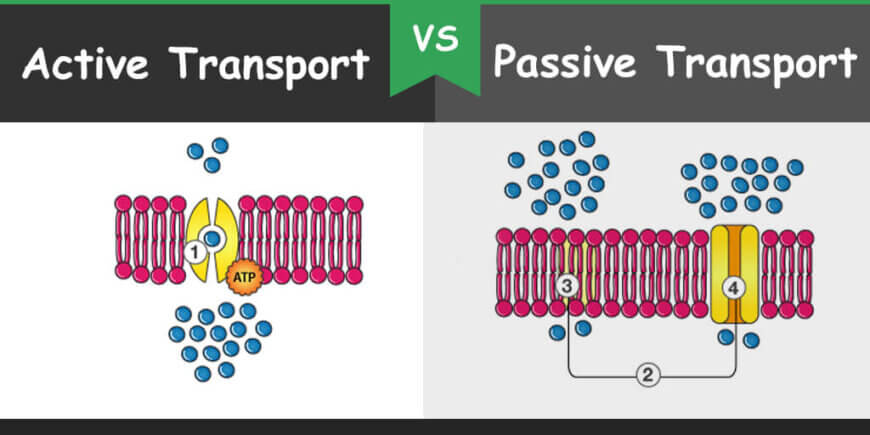 What is Active Transport?

Secondary active transport, the electromagnetic gradient is used to transport across the cell membrane and multiple processes of transport are involved at the same time. For example, SGLT2, a glucose transporter, allows sending glucose molecules into the cells by bringing the sodium with it as well against a concentration gradient. The energy released by the sodium is used to power this process.

What is Passive Transport?

In passive transport, molecules move along the concentration gradient without the use of cellular energy. It uses natural entropy until the concentration across both sides becomes balanced. Simple diffusion facilitated diffusion, osmosis and filtration are four basic types of passive transport. In simple diffusion, non-polar molecules move through the permeable membrane from a higher concentration area to the lower concentration area to maintain equilibrium. In facilitated diffusion, molecules are facilitated to move through the pores or channels which are made from glycoproteins. These pores are present in cell membranes and very specific for the molecules of the certain ions or molecules and thus perform certain functions. For example, GLUT4 is a glucose transporter which is present in fat and skeletal muscles. Insulin triggers it to insert into the membranes of these cells so that glucose can be taken from the blood. It is helpful in preventing heart disease, stroke, and kidney failure by decreasing the level of glucose in the blood.