Respiration is a continuous chemical process which provides energy for the fuel of biological processes such as the growth of cells, muscles contractions, protein synthesis, sending nerve impulses and absorbing molecules for the active transport in the body. Without respiration, the survival of an organism is not possible. 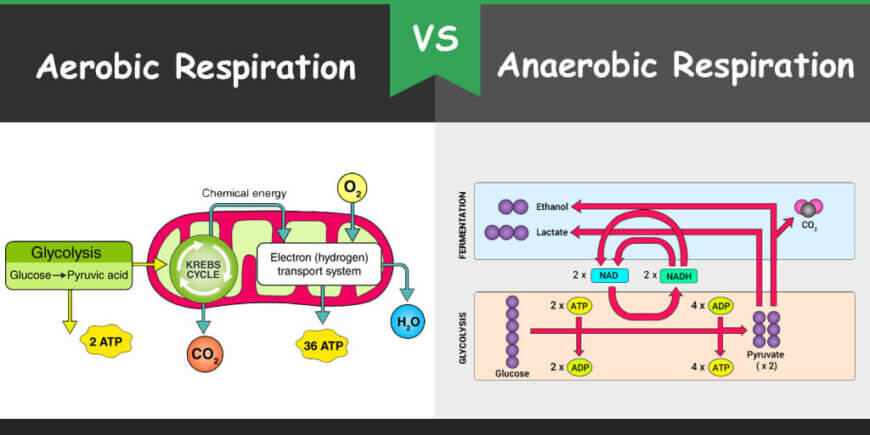 What is Aerobic Respiration?

In aerobic respiration which is also called cellular respiration, animals break down the food substances for producing energy with the use of oxygen. It occurs in a series of reactions which are catalyzed by the enzymes. The aerobic respiration process occurs in mitochondria of the cells where electrons from the glucose molecules are transferred to the electron acceptor; oxygen. Aerobic respiration starts with the glycolysis which is also called the Embden-Meyerhof-Parnas pathway and also involved the citric acid cycle (Tricarboxylic acid cycle) and electron transport chain. The citric acid cycle is also called the Kreb’s cycle. 40 ATPs are produced in one cycle. Four ATP from glycolysis, two from tricarboxylic acid and thirty-four from electron transport but two ATPs are consumed during glycolysis so net production is 38 ATP molecules.

While the net amount of energy released is 2900 kJ/mol of glucose. Lactic acid is not produced. The aerobic respiration process goes on always in the plants and animals.

What is Anaerobic Respiration?

The lactic acid needs to be converted into carbon dioxide and water by oxidation so it causes oxygen debt that is repaid on the stop of exercise or taking a break of breathing during exercise. Glucose is partially broken down into the energy so a little amount of energy is released during anaerobic respiration. Anaerobic respiration also occurs in some microorganisms and plant cells. It happens in yeasts and called fermentation which is used for wine, yogurt, brewing and bread making. It makes ethanol and carbon dioxide as final products.

Ethanol is actually the alcohol which is used in drinks while carbon dioxide makes bubbles in the bread during the process and helps the bread to rise.