Angiosperms and gymnosperms are two groups of vascular plants that are different from each other based on the type of seeds. Angiosperms are flowering plants whose seeds are enclosed and protected inside the fruits. On the contrary, gymnosperms have naked seeds that are present in the form of cones and scales. 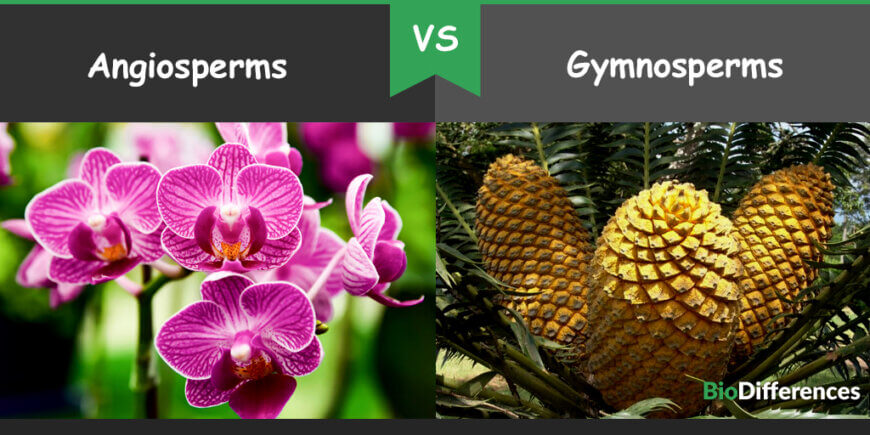 There are almost 25,000 species of angiosperms plants present on the earth. These are seasonal plants that die during the autumn season. These plants are the source of hardwood and represent 80% of all known green plants.

There are almost 1000 existing species of gymnosperms. The main reason for being fewer species of these plants is the lack of protection of their seeds. The seeds are unprotected when released. They need to get into the soil quickly to grow. In the other case, they will be damaged by animals, weather conditions, or by other factors. But these are evergreen plants. Gymnosperms stay alive for a long duration. These are the source of softwood.

Angiosperms and gymnosperms also differ from each other in structures.

Angiosperms have a wide variety of species, which include herbs, shrubs and trees. These plants have a proper root system, which aids in gathering minerals and water from the soil. Flat leaves in these types of plants are the source for the intake of food and the stems work as the transportation system of the body.

In angiosperms, the embryo has one or two cotyledons. Ovule gets into a seed within the enclosed ovary after fertilization. The ovary is surrounded within the flower and has both male and female reproductive systems. An ovule is covered by a few thin integuments of slender micropyle in these plants. The fruits of angiosperms get derived after the maturity of the floral organs of the plants.

Angiosperms have diverse use because of economic significance. They serve as a source of ornamentals, pharmaceuticals, fiber products, food, nuts, oils and other commercial purposes. Tropical angiosperms are used as a source of timber.

Gymnosperms have roots and stem which aid in the anchoring and absorbing water and minerals from the soil. Stems help in transporting these materials. But gymnosperms do not have ovary, stigma and style contrary to angiosperms. Gymnosperms have a needle and scale-like leaves which reduce water loss. These plants are mostly limited to woody plants.

Angiosperms have unisexual fertilization. The embryo has one or more cotyledons. The seeds develop on the megasporophyll and fruits are never formed in these plants. The ovule is covered with three layers of integuments of wide micropyle. Their seeds are enclosed in cones where male cones produce pollens while female cones produce eggs. Male is called as pollen cones and female is called seed cone. Cones protect the seeds where zygote gets hardens itself.

Gymnosperms have archegonia present and one or two prothalial cells, stalk cell, tube cell and a body cell. These are further divided into two male gametes in gymnosperms.

Cedar, redwood and pine are examples of gymnosperms. These plants can be divided into three more categories; Cycads, Ginkgo and Conifers. These three types undergo the process of alternation of a generation where plants alter among gametophyte and sporophyte. Pollen cones release pollen, which is the haploid stage as double fertilization and triple fusion are absent in these plants. The endosperm is produced before fertilization. These plants are common to the lumber industry. Trees of these woods have many uses.