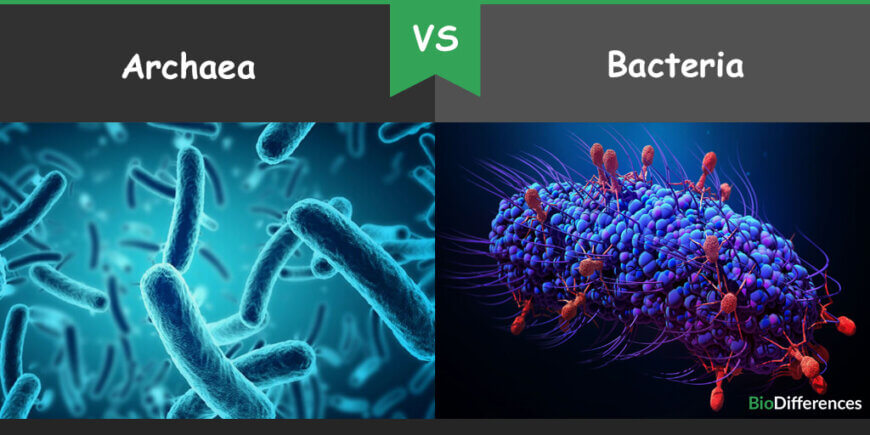 Bacteria are the first to form of life on the earth with small sizes and various shapes. They are found ubiquitously everywhere and sometimes cause harm to humans and sometimes provide certain benefits to humans.

Archaea are the most primitive form of the living microorganism on the earth and named archaebacteria previously but now termed as archaea because of showing specific characteristics of eukaryotic cells.

Archaea have special characteristics of surviving under extreme temperatures so they are known as extremophiles. These are single-celled microorganisms as other bacteria with an undeveloped nucleus and no organelle. Their genetic material is in the form of a loop which is called plasmid. Anatomy and physiology of archaea are similar to eukaryotic organisms which are the distinctive feature of this group. Archaea size ranges from 0.5 to 4 micrometers and has rods, spirals, plates, and spheres. Archaea are different from other bacteria because of cell membrane which is composed of pseudo peptidoglycans which are composed of peptidoglycan in case of other bacteria. In pseudo peptidoglycans, lipid membranes are ether-linked with additional branching of aliphatic acids. This membrane acts as a barrier in the cell and outer environment. It is surrounded by a cell wall and helps to maintains its shape and chemical equilibrium.

Archaea possess a single circular chromosome in plasmid form which divides asexually by budding, binary fission and fragmentation. Archaea have one flagellum which helps in the locomotion and to identify unfavorable conditions for survival. They are mostly metabolically active in the situation of acids, pH, pressure, high temperature, and deep water.

Archaea are of three type; methanogens, thermophiles, and halophiles. Methanogens are a very diverse group of archaea and play an important role in wastewater treatment. These can convert bacterial waste products and carbon dioxide into methane. Methane is considered a greenhouse gas and help in reducing global warming. Methanobacterium is an example of this group. Thermophiles are the types of archaea that can survive at higher temperatures 106° to 252° F. They can be divided into further into three classes; simple thermophile, extreme thermophile or hyperthermophiles. This group has a salient role in biotechnology while performing a Polymerase Chain Reaction. Its common examples are Thermus aquaticus and Thermuococcus litoralis. Halophiles, the third type, are known as salt-loving extremophiles. These are fond of living in high salt concentration like in evaporation ponds, the deep sea of the Dead Sea and the Great Salt Lake. Halococcus and Halobacterium are examples of halophile estraea.

What are the Bacteria?

Bacteria, also known as Eubacteria are the prokaryotic microorganism which lacks the nucleus and membranous bound organelles. All the processes take place in the cytoplasm. The bacterial cell is surrounded by a membrane that supports, protects and regulates the transport of materials. Bacteria have a single chromosome as genetic material and ribosomes for the synthesis of proteins. The cell wall of the bacteria is composed of peptidoglycan which has ester linkage of fatty acids. They also possess some special appendages for mobility and have the ability to reproduce even in high temperatures. Bacteria can reproduce sexually as well as asexually.

Key Differences between Archaea and Bacteria

In sum, archaea and bacteria both belong to prokaryotes but archaea have some characteristics common with eukaryotic cells and bacteria are more complex microorganisms.

1 thought on “Difference between Archaea and Bacteria”