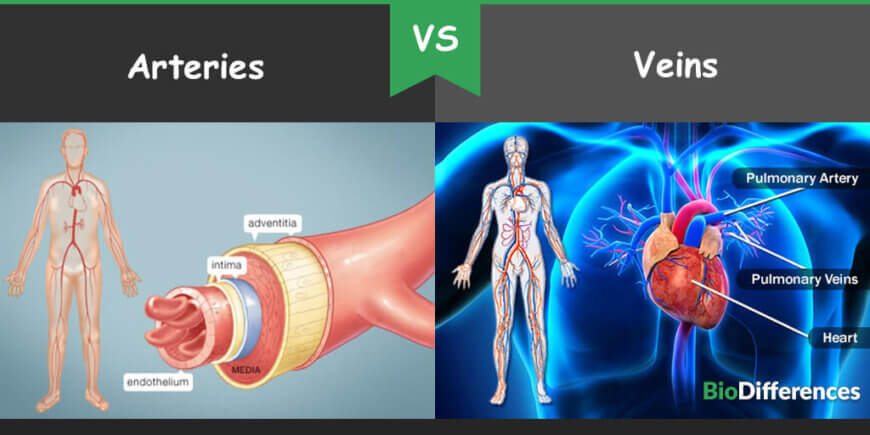 The word “arteries” is the plural form of the artery. It is the blood vessel that delivers oxygenated blood with other nutrients from the heart to all tissues of the body. It has been studied in the human physiology. Arteries are the muscular tubes in soft tissues and have three layers; the intima, the media, and the adventitia. During the pumping action of the heart, these muscular tubes transport blood under the high pressure towards all the body.

Intima is also called tunica intima, which is the inner layer of the wall of an artery. It has direct contact with the flowing blood. The media, also known as Tunica Media, is the middle layer. It is composed of elastic fibers and smooth muscles. The adventitia, also known as Tunica Adventitia, is the outermost layer of the artery. It is composed of elastic fibers, collagen, and the connective tissues.

The largest artery of the heart, aorta, arises from the left ventricle of the heart. Its structure has many small branches known as smaller arteries.  These small arteries are divided into the sub-branches called arterioles. Further sub-branches of the arterioles are known as capillaries. The arteries and their sub-branches arterioles have more smooth muscles to regulate the changing pressure during blood flow. This pressure is the result of the pumping of the heart. It is of two types; the diastolic pressure and systolic pressure. In the diastolic phase, the heart is considered in the rest position. In this phase, blood pressure is low. In the systolic phase, blood pressure is high because of the contraction of muscles of the heart. This pressure forces the blood into the arteries. This change in pressure is felt at the time of checking the pulse rate. All arteries carry oxygenated blood except the pulmonary artery, which carries deoxygenated blood to the lungs. Lungs remove carbon dioxide from the blood.

Veins are also components of the vascular system and perform functions just opposite to the arteries. When blood is used by all the tissues to get oxygen and other nutrients, and all waste materials and carbon dioxide are given to the blood from the tissues and organs, it is returned back to the heart through veins. The blood saturated with carbon dioxide and waste materials are called deoxygenated blood. When this deoxygenated blood is carried to the heart, the heart sent it to the lungs, which carbon dioxide is replaced with the oxygen and is again sent to the tissues and organs of all body to get nutrients.

Veins are of different sized depending on the location and function. The largest vein is located in the center of the body and connected with the all small veins of the body. It collects all the deoxygenated blood by all small veins so it is the collection center. The superficial veins are the veins closer to the skin whereas deeper veins are located in the center of the body. The superficial veins and deep veins are connected with each other through perforating veins.

Key Differences between Arteries and Veins

In conclusion, both arteries and veins are the main components of the blood circulation system of the body and play a significant role in blood flow. But both differ from each other in various aspects.