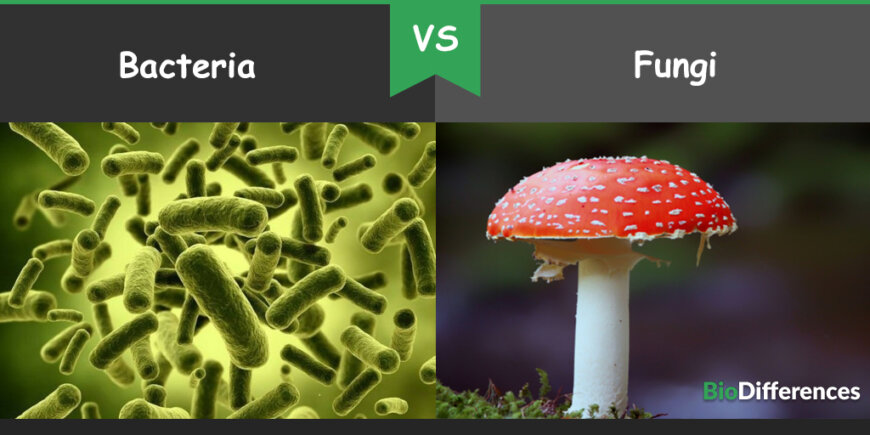 Bacteria are prokaryotic organisms that are considered as first organisms on earth as bacteria were evolved around 3.5 billion years ago. They can be of both autotrophs and heterotrophs. Autotrophs can prepare their food by chemosynthesis or photosynthesis. Heterotrophs depend on the host for their nutrition. Bacteria are present in three shapes; spherical, rod-shaped and spiral shape and reproduce asexually by binary fission or conjugation.

Bacteria are beneficial in releasing nitrogen to the plants and in decomposing organic matters. Bacteria also helps in the fermentation process for making cheese, curd and yogurt. But sometimes, they cause illnesses such as tuberculosis, spoiling of food and contamination of water. Bacteria are responsible for tuberculosis, sore throat, pneumonia, throat infection and stomach related problems.

Fungi are the eukaryotic organism which can be cellular or multicellular, derived from protists 900 million years ago. Fungi are thread-like structures called hyphae when these hyphal structures grow and form a thick mass called mycelium.

Fungi are heterotrophic organisms and use organic carbon for their nutrition. They secrete hydrolytic enzymes by spreading in soil and rotten wood-feeding off the organic remains. They are considered as saprophytes because of feeding on the dead and decaying materials. Fungi reproduce sexually as well asexually by fragmentation, developing branches, budding or spore formation.

Fungi are used in making antibiotics. Some are used as edibles and some are used for making bread. But a few fungi are also responsible for plant and animal diseases. Fungi cause ringworm and athlete’s foot.

Following are the components of fungi:

In conclusion, bacteria are prokaryotes and fungi are eukaryotes. Both have many structural differences from each other. Both cause different diseases in humans and other organisms.