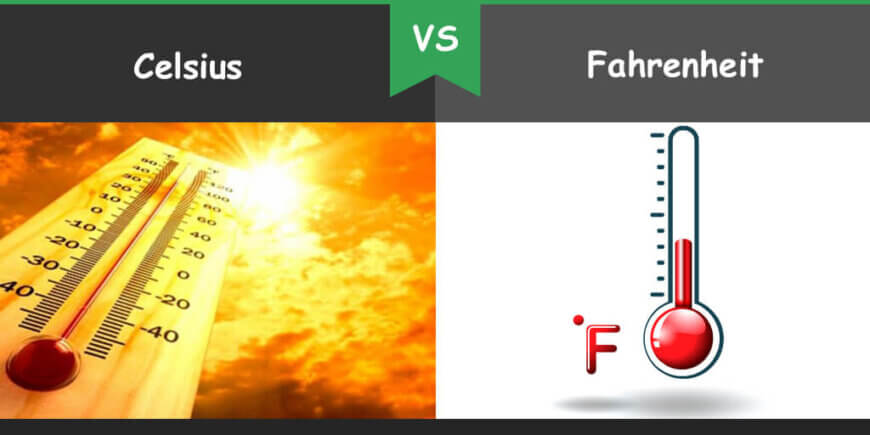 These two scales are different from each other in many aspects. These scales are selected for use based on these factors. Celsius is used for measurements all over the world except in the United States. United States use Fahrenheit as a measuring tool. This scale is also not used in some countries where Kelvin is used.

Celsius is the most straightforward scale of measuring temperature. However, the value of these two scales is convertible to each other by applying a mathematical formula.

Celsius temperature scale is the part of the metric system and is used to measure the temperature of patients and weather in many countries. Celsius was proposed in mid-1700 by an astronomer Andres Celsius. He took water as the base and set some specific standard values which are clear to figure out. The freezing point of water is 0oC and the boiling point of water is 100oC. Similarly, the average human body temperature is 37oC and the absolute zero value is -273.15oC. This scale has been using in many countries except the United States and its territories.

Celsius was earlier named as the centigrade scale. Its endpoints are separated by 100 degrees. The word has derived from the two Latin words; centrum and gradus. The word Centrum means hundred and “gradus” means “scales or steps”. Celsius is the proper name of a centigrade scale of temperature. It is denoted by oC. Celsius is the easiest method to understand the temperature reading. One degree Celsius is 1.8 times larger than one degree Fahrenheit.

Celsius and Fahrenheit’s values are interconvertible by applying an easy formula which is the following:

A German Physicist Gabriel Fahrenheit (1686-1736) invented the mercury in the glass thermometer in 1714. That thermometer is still in use after 300 years and is one of the accurate and widely used means of measuring temperature scale. After 10 years of this invention, Fahrenheit proposed this temperature scale that set freezing point at 32 degrees and water boiling point at 212 degrees. So it makes the difference of exactly 180 degrees from the Celsius.

Fahrenheit is another parameter to measure temperature but has used only in the United States and it’s few territories. The human average body temperature is 96oC and absolute zero is -459.67oC on this scale.

The values of Fahrenheit can also be convertible to Celsius by the following formula:

Key Differences between Celsius and Fahrenheit

In conclusion, Celsius and Fahrenheit temperature scales are two scales for the measurements of temperature. Both are widely used and accepted.