Cilia and flagella are hair-like appendages arising through the surface of the living cell and differ from each other in size, number and beating. Cilia are short hair like locomotory organelle present in large numbers in a cell, whereas flagella are long hair like complex structure, which are few per cell. 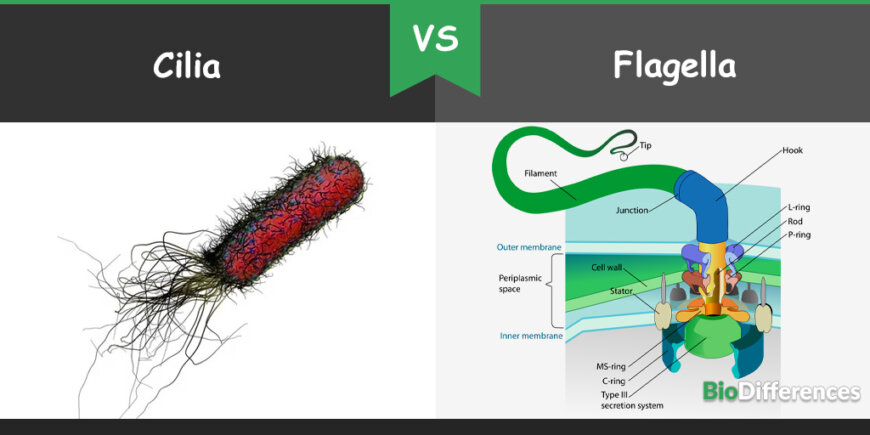 This word is derived from Latin and pronounced as “silly-ah” which is the plural form of the cilium. It means “eyelash.” Cilia are short, slender, hair-like appendages arising from the surface of the cell. The width of the cilia is less than 1µm and the length varies from 1 to 10µm. These are part of almost all eukaryotic cells and play a significant role in cell development. They are most active during the cell cycle progression and proliferation. Organisms having cilia move very fast and more efficiently. Researchers have discovered that WBCs move similarly. When any injury appears in the body, WBCs traverse the blood vessels with the help of cilia.

Cilia can be divided into two types; motile and non-motile. Motile or moving cilia are present in the lungs, middle ear and respiratory tract. These cilia can be found in both single-celled eukaryotes and higher humans. These types of cilia beat rhythmically. Their role is to keep the airways clear of mucus and dust because of which it is calm to breathe freely and without any irritation. They also help in the locomotion of sperm. In the fallopian tube, cilia serve to move the ovum to the uterus.

Nonmotile cilia also known as primary cilia, play a role in receiving messages from other cells or nearby fluids by acting as the antenna for the cells. In the kidney, the cilia send messages to the cells about the flow of the urine. In the eyes, non-motile cilia support the transportation of vital molecules from one end of the photoreceptor of the retina to the other.

It is pronounced as “fla-gel-ah,” and it is the plural of the flagellum. Flagella is derived from the Latin word, which means “whip.” Flagella are hair-like complex filamentous structure extending through the cell surface. Their main functions are adhesion, signal transduction, sensation and movements.

Flagella are made up of a specific protein called flagellin, which is embedded in the cell envelope. Flagella’s body consists of Hook, filament and the basal body. The hook is the cell envelop, the filament is the outer part of the cell and the basal body is attached to the cytoplasmic membrane through the ring-like structure. Flagella’s body movement is powered by the proton motive force of the plasma membrane.

In conclusion, cilia and flagella are two different types of locomotory organelles of prokaryotic and eukaryotic cells. Besides this, they also perform certain other physiological processes such as circulation, respiration, excretion and locomotion. Both are the same structure but differ from each other in their number, size and beating mode.