Earth is the only planet consisting of life from the microscopic organisms to the larger animal. To understand the management, activity and organization of life, it is better to understand a few terms such as biosphere, biome, ecology, individual, population and community. 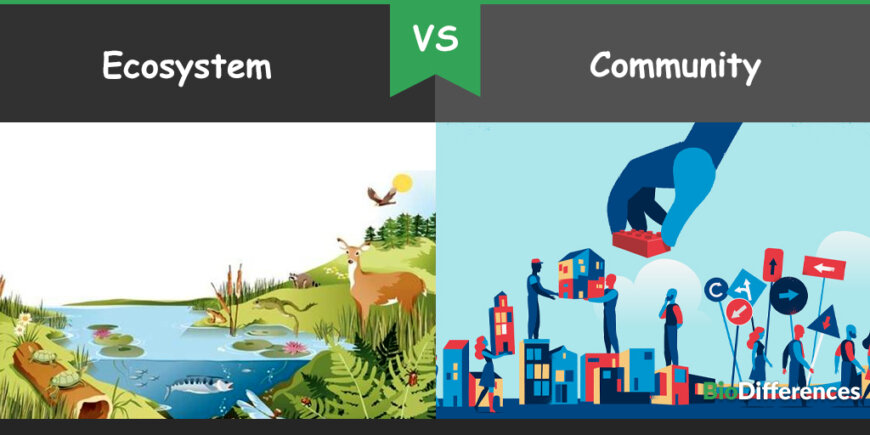 The main difference between ecosystem and community is that ecosystem comprises of various communities, which contain living as well as non-living components interacting with each other. On the other hand, the community is the interaction of different individuals of populations of different species living in a particular geographical area. The community consists of only living components.

What is the ecosystem?

Although each ecosystem is unique, a few standard components are part of each ecosystem, which are producer, consumer and decomposer. Producers play a vital role in the production of energy. Producers prepare their food with the help of using sunlight. The best example of producers is plants that prepare their food by the process of photosynthesis using sunlight. Consumers depend on the producers directly or indirectly for the food. Animals are an example of consumers who eat plants. Decomposers decompose the materials and convert them into the soil. Bacteria and fungi are examples of decomposers.

What is a community?

All the living organisms vary with one another in different aspects, but they cannot live alone on the earth. They need support from each other to survive. Hence, the community can be defined as the interaction of the living organisms with the different types of species inhabiting together in the same environment as well as in a specific region.

For the survival in a community, organisms depend on each other and make relationships. Three types of interactions can exist within the living organisms in a community; mutualism, commensalism and predation. Mutualism is the interaction in which both parties in the relationship get benefit from each other. In commensalism, one organism in the relationship gets the advantage, whereas the second organism remains neutral. In predation, one organism receives the benefit, but the second organism is harmed.

The community is the part of an ecosystem that consists of populations of different types of species living together. There is the level of hierarchy that is followed to reach the top level called the Biosphere. This top-level is the point where all the biomes and ecosystems meet and it is a sum of the factors right from the individual level to the biomes.

In conclusion, ecosystem and community are two ecological terms that describe the distribution of the species in a particular geographical environment. Both represent the interactions between living organisms.