The food chain is the part of the natural ecosystem in which food, nutrients, and energy are transmitted from one organism to another organism whereas the food web is a system in which numerous food chains are interconnected with each other. 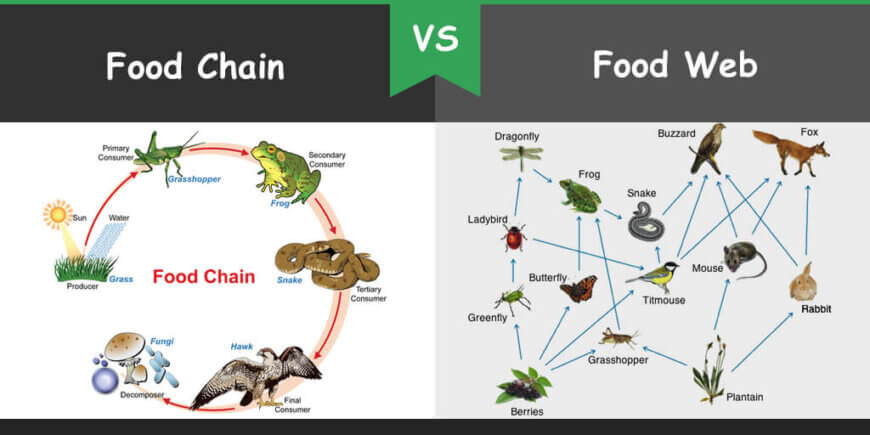 In an ecosystem, all living organisms depend on each other for food which develops a food chain and in this way, they survive and reproduce. But organisms cannot depend on only one type of food chain so they have to interact with another type of food chain which eventually leads to the formation of a food web. All types of food chains have sunlight, producer, consumer, and decomposer as its components.

What is the Food Chain?

Heterotrophs are other organisms that feed on primary producers are collectively known as heterotrophs. They are unable to capture energy to produce organic matter so they consume organic compounds that are produced by primary producers. Herbivores are called primary consumers since they directly feed on the plant matter. Carnivores are called secondary consumers since they consume both plant and animal matter to obtain energy. Omnivores show the final consumer level since they only consume animal matter and are called tertiary consumers. Some food chains have an apex consumer that shows a quaternary consumer level. Decomposers represent another significant trophic level of a food chain but they are not always appearing in a food chain. Sometimes, they are regarded as a separate trophic level since they consume decaying plant and animal matter.

The food chain is of two types based on the sequence of transfer of energy; grazing food chain and detritus food chain.

On the other hand, the detritus food chain starts with the dead organic matter which was produced in the grazing food chain. The waste material such as dead bodies of animals or fallen leaves is eaten by the decomposers. At last the organic matter gets decomposed by their predators. Energy flows in a large amount in this food chain.

What is Food Web?

A food web is an interconnection of food chains in an aquatic or terrestrial ecosystem. Each and every organism is part of numerous food chains and each food chain is one possible route for food and energy to take within an ecosystem. It shows plants and animals are connected by different paths that are significant for their survival. Each component of the food web is important. Missing one part can arise danger for the survival of others. Food webs are used as models of actual ecosystems as they systemically and accurately group different species according to the same prey and predators they have on the food web.

A food web has different levels. At the bottom are the basal species, which include organism autotrophs and detrivores. Autotrophs make their own food while detrivores decompose organic matter. Organisms of intermediate level eat both animals and plants of different trophic levels. These organisms cause energy to pass through different pathways that initially start from basal species. At the very top, alpha predators are present which have no natural predators.

In conclusion, the food chain and food web are interlinked terms. A food chain is a component of the food web. But both have many differences to be described.