The human body is composed of billions of cells. A cell consists of a nucleus which has chromatin. According to biochemist scientists, the chromatin is the combination of DNA, RNA, and protein extracted from eukaryotic lysed interphase nuclei. Chromatin is responsible for packaging DNA into small volumes so that they can fit inside the cell. It also helps in strengthening the DNA for mitosis and miosis to take place. It also prevents DNA damage and controls the gene expression and replication of the DNA. Chromatin is classified into two groups; heterochromatin and euchromatin. Emil Heitz coined these two terms in the year 1928. 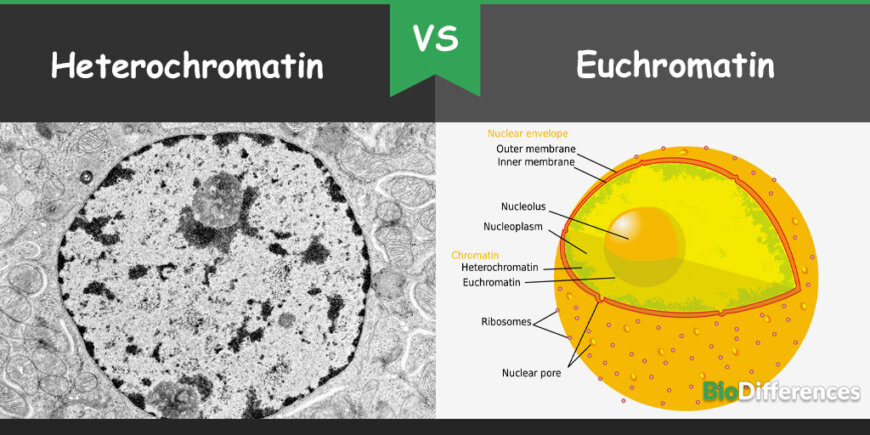 When one observes the non-dividing cells of the nucleus under the light microscope, it shows two regions, on the ground of the concentration or the intensity of staining. The dark stained regions are said as heterochromatin and light stained areas are called euchromatin.

Heterochromatin is an area of the chromosomes which are intensely stained with DNA specific strains. These are a tightly packed form of the DNA in the nucleus.

While the repetitive and structurally functional genes such as telomeres or centromeres are called constitutive heterochromatin, these are the continuing nature of the nucleus of the cell and contain no gene in their genome. This structure is retainable in the interphase of the cell.

The function of the heterochromatin is to protect the DNA from the endonuclease damage because of the compact nature. It also prevents the DNA regions from getting access to proteins during gene expression.

The which is rich in gene concentrations and is a type of chromatin loosely packed is called euchromatin. They are active during transcription. Euchromatin composes almost 90%of the entire human genome and covers the maximum part of the dynamic genome of the inner nucleus. Under a light microscope, its parts can be observed as loops that seem to have 40 to 100 kb areas of DNA in it. Under a microscope, it appears as light-colored bands. The diameter of the euchromatin fiber is about 30 nm.

To permit the transcription, some parts of the genome containing active genes are loosely packed. The loose wrapping of the DNA makes it available at the time of the process. The structure of euchromatin is similar to nucleosomes, which contains histones proteins having around 147 base pairs of DNAs wrapped around them.