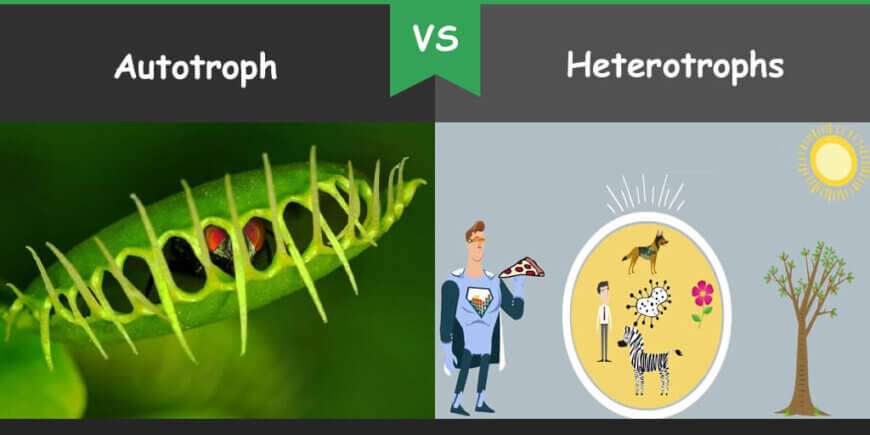 Our earth has many organisms not just humans. All need energy and nutrition for their development and growth. Heterotrophs and autotrophs are two categories of the organisms based on the mode of nutrition or the way of consumption of food. In the food web hierarchy, autotrophs are called primary producers as they are able to prepare or produce food for themselves. Heterotrophs are regarded as the secondary or tertiary consumers in the food web hierarchy as they depend directly or indirectly on others.

The word “heterotroph” is derived from the Greek word in which “hetero” means different and “trophe” means nourishment. So the organisms which obtain their nutrition by eating plants, other animals and by decomposition of matter are placed in this category. In cellular respiration, sugar and oxygen are utilized to produce carbon dioxide, water and energy in the form of adenosine triphosphate (ATP). ATP is the main form of energy used by the heterotrophs. Heterotrophs are not able to produce energy and nutrition for themselves so they absorb or obtain from others.

Autotrophs are the group of organism which are considered primary producers in the food chain hierarchy. The word “autotrophs” is from Greek language where “auto” means “self” and “trophe” means “nourishment”. Autotrophs are capable of producing their own food through photosynthesis or chemosynthesis by using water, air and sunlight.

Plants with green leaves, mosses, algae and phytoplankton use photosynthesis to acquire energy. In the process of photosynthesis, plants take energy from the sun and use them to convert carbon dioxide from the air and water from the soil into a nutrient called glucose. In photosynthesis, light energy is converted into chemical energy. Glucose is the form of a sugar and a nutrient for the plants. This is also used to make cellulose which help plants in rigidity of cell wall.  Autotrophs do not move to other places in search of food.

Some autotrophs use another process instead of photosynthesis, chemosynthesis in which they use energy from chemical reactions to make food rather than obtaining light as energy source. Organisms which live in extreme environments for example bacteria living in active volcano or in deep oceans do chemosynthesis for food.

There is a class of plants which are called carnivores because they depend on living organisms for food. For example, pitcher plants are carnivores and also known as mixotrophic as they obtain energy from both plants and animals. They perform photosynthesis as well as chemosynthesis.

Key Differences between Heterotrophs and Autotroph