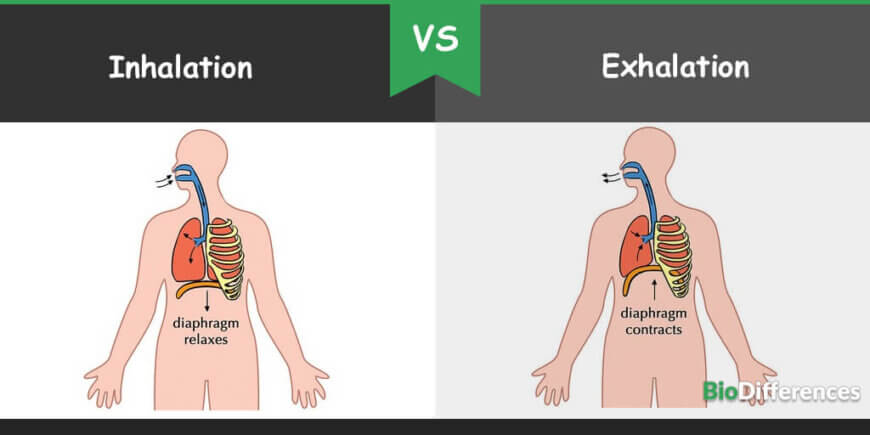 Both inhalation and exhalation are parts of breathing. Breathing rate varies from person to person and depends on the kind of activity they perform in a day. The average rate of breathing in an adult is 15 to 18 times a minute. However, it may increase up to 25 times per minute in case of heavy exercise, running or fast walking.

Breathing is sometimes confused with the respiration. Breathing can be said as the process of exchanging gases from the lungs with the help of respiratory organs. The mechanism of breathing follows Boyle’s Law which states that pressure and volume have an inverse relationship.

On the other hand, respiration is a complete biochemical process in which the cells of organisms gain energy by combining oxygen and glucose and gives out carbon dioxide, ATP, and water.

Inhalation is also known as “breathing in”. When we breathe in or inhale the air through the nostrils, it then passes through the nasal cavity, from where the air rich in oxygen reaches the lungs through the windpipe.

The lungs are surrounded by the ribs and located in the chest cavity. Ribs from the cage-like structure called rib-cage and have a muscular sheet known as a diaphragm which lies at the bottom of the cavity.

During breathing, when the oxygen-rich air reaches the diaphragm, it contracts or tightens and moves downward. The space in the chest cavity increases and the place into which the lungs get to expand. The chest cavity also gets enlarged due to intercostal muscles present between the ribs. This helps in the contraction and pulling of rib cage both outward and upward.

When the lungs expand, air enters through the mouth or nose. This air travels downward through the windpipe and into the lungs. The air certainly reaches the alveoli, after passing through bronchial tubes. The air passes to the nearby capillaries through the thin walls of the alveoli. Now, this air moves to the blood from the air cavity with the help of a protein called hemoglobin.

Exhalation is also known as “breathing out”. This process is opposite to that of inhalation. In this process, there is no contraction of muscles so it is considered a passive process. In this, the diaphragm gets relaxed and moves upward into the chest cavity. Even the intercostal muscles between the ribs also get relax which reduces the area in the chest cavity.

Gradually, the area in the chest gets decreased and the air rich with carbon dioxide and a little amount of nitrogen forced to move out of the lungs and windpipe and finally out through the nose.

In conclusion, inhalation and exhalation are the opposite processes of breathing. They differ from each other in the behavior of chest cavity, diaphragm and intercostal muscles which act opposite in both processes.