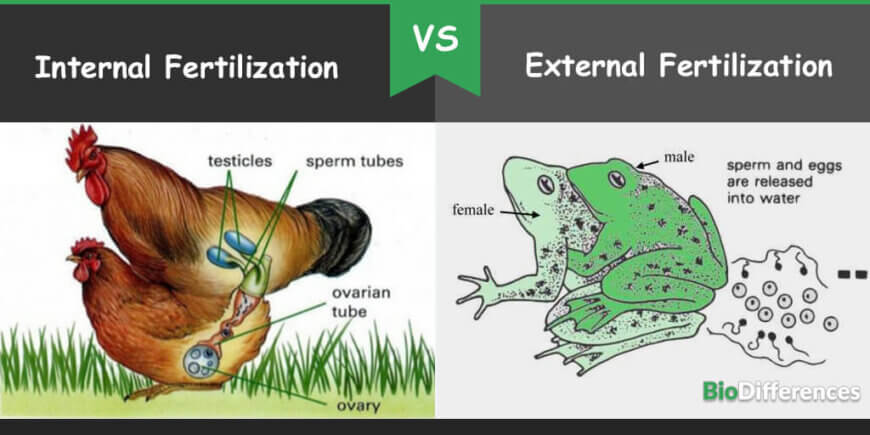 What is Internal Fertilization?

Oviparity fertilization occurs in animals that lay eggs outside and the nourishment is provided to the offspring by the presence of the yolk in the egg. The animals in which oviparity occurs are called oviparous such as birds, amphibians, reptiles, bony fish and a few cartilaginous fish.

Viviparity method is followed by a few reptiles, mammals and cartilaginous fish. In this fertilization, the offspring develop within the body of a female and receive nourishment through the placenta from the mother’s blood. After the development, the offspring comes out of the mother’s body. These animals are known as viviparous.

In ovoviviparity, the eggs are kept in the female body and the nourishment is provided from the yolk present in the egg only to the developing embryo. When the young one is fully developed, the egg is hatched and the young one comes out. Lizards, snake ad sharks follow this type of internal fertilization.

In internal fertilization, as the fertilized egg remains inside the body of a female, so is protected from the predators as well as from the harsh climate. Hence, the chances of survival of the offspring are higher.

In internal fertilization, the mates are selective and there are lesser chances of desiccation of gametes.

What is External Fertilization?

Fish, sea urchins, a few vertebrates, all aquatic invertebrates and most amphibians show external fertilization in which male and female sex cells unite in the external environment. Sperms and eggs are deposited into the open surrounding which is called spawning. In another method, the sperms swim through the water to get unite with the eggs and get fertilized which is called broadcast fertilization.

There are also some disadvantages of external fertilization. There are a few chances of survival of the offspring as the parents can not provide care to each offspring. A large number of unfertilized gametes will be wasted due to unprotection as well as from desiccation. Secondly, male parent must produce a large number of sperms as each sperm may not fertilize the egg. Similarly, females must deposit dozens of eggs for successful fertilization. Predators and other environmental hazards minimize the probability of external fertilization.