Mitochondria are the organelles of the cell for generating energy for the cell in the form of ATP by using nutrients and oxygen. The chloroplasts are present in green plants and green algae for the process of photosynthesis. 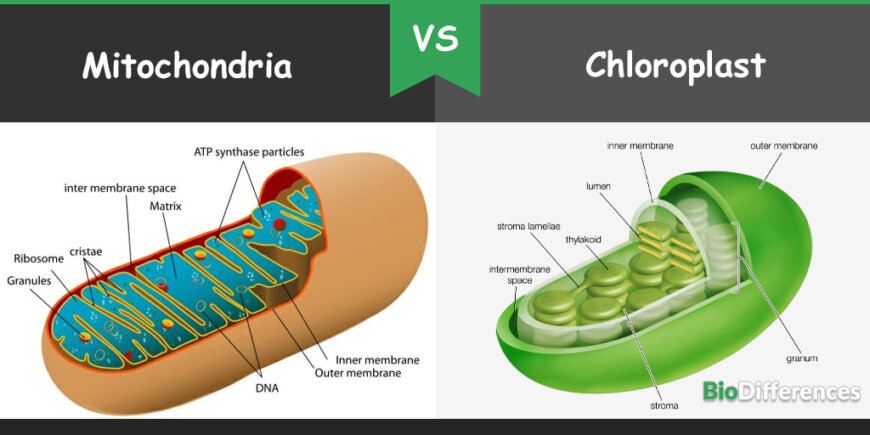 Mitochondria and chloroplast both are membranous bound organelles of the eukaryotic cell. Mitochondria is the important organelle present in the living cell and is a producer of the energy for the cell and other organelles by cellular respiration. Their shape and function are similar to bacteria even they have their own circular DNA and ribosomes and their tRNA like that of bacteria.

The chloroplast is another enclosed membrane of the eukaryotic cell. These are present in particular types of the cell. And performs the function of the preparation of the food that is photosynthesis by using sources like sunlight, water and air. It is accepted that chloroplast has genomes for photosynthesis and originated from the symbiotic photosynthetic bacteria.

The word “mitochondria” is derived from the Greek word, whereas “mitos” means “thread” and “chondrios” means “granules.” Mitochondria are also known as the powerhouse of the cell as these organelles perform the main function of the production of the energy.

Mitochondria have a bean and rod-shaped structure. The diameter ranges from 0.75 to 3µm but varies in sizes. It occupies about 25% of the total cell volume. In a typical cell, the number of mitochondria present depends on the metabolic requirements of that particular cell and therefore, it can be thousand or a few.

Mitochondria use the oxygen and nutrients to synthesize the energy in the form of ATP. This process is called aerobic respiration. This is a much more efficient way of ATP production than anaerobic respiration. Besides the production of ATP, mitochondria help in the cell signaling, regulation of the cell cycle, cell growth, cell death as well in cellular differentiation.

Cellular respiration is not a simple process; the process involves three main steps; glycolysis, citric acid and Kreb’s cycle and ATP synthesis. Moreover, ATP released from the mitochondria is used by other organelles of the cell.

Chloroplasts are the double-membrane organelles of the cell and considered to be originated as endosymbiotic cyanobacteria. These are found in green plants and green algae for the process of photosynthesis. Chloroplasts have a genome for the photosynthesis. In this respect, they are similar to mitochondria but are found only in plants and Protista.  These are complex structures with the 0.5 to 2µm thickness and 10µm size.

Chloroplasts are surrounded by the two membranes. The outer membrane is permeable to small organic molecules, whereas the inner membrane is less permeable and studded with transport proteins. The structure of the chloroplast also has a rigid cell wall. Its most important organelle is thylakoids, which are the flat disc-shaped structure. Numerous thylakoids combine to make a bundle, which is called grana. These grana are present in the central area of the stroma. Stroma, which is present in the innermost matrix of chloroplasts, have metabolic enzymes and multiple copies of the chloroplast genome.

Another important part of the chloroplast is chlorophyll, which is a green pigment and plays its role in capturing the sunlight. Chlorophyll is also present in thylakoids. The thylakoid membrane also has enzymes and other light-absorbing pigments that are used in the production of energy in the form of NADP and ATP.

In conclusion, both mitochondria and chloroplasts are membranous bound organelles of the cell. Both perform a somewhat similar function but structurally different from each other.