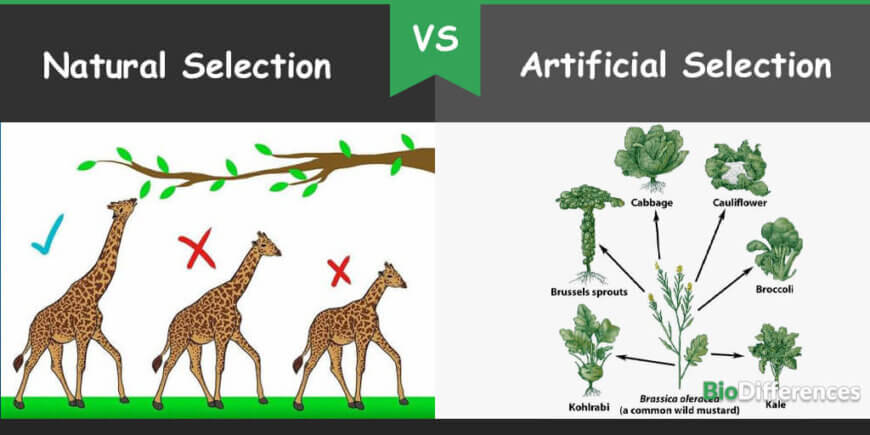 In 1859, Charles Darwin proposed the idea of evolution first time and theory is called “Darwinism” or “Natural Selection Theory.” Evolution is the gradual development of organisms from their earlier forms to the new forms. Many mechanisms affect the process of evolution such as mutation, genetic drift, and migration but natural selection is a widespread and strongly accepted mechanism. Artificial selection is the unnatural selection of organisms with the interference of humans’ activity. There is also some other difference between natural and artificial selection.

What is Natural Selection?

Natural selection is the type of selection in which nature plays a role that selects fittest species in any specific, and humans’ choices are not favored. Darwin’s theory of evolution is widely accepted by scientists in order to explain the selection and working of nature. Evolution is actually the mechanism of natural selection in which fittest and healthiest organism is sorted and permitted to survive and reproduce to give birth to the next generations. While the weakest organisms which are not able to adapt with the natural variations are not allowed to grow and reproduce further.

Natural selection is for all kinds of organisms; terrestrial, aquatic, or arboreal. In this type of selection, the development of new generations is prolonged but the new generations produce very transformed and strong organisms that can survive and adapt in all situations even better than previous generations.

The evolution of long necks of Giraffe is an excellent example of natural selection or evolution. Earlier Giraffe did not use to have long necks but their food was the leaves of tall trees, which was once unreachable to them and in order to survive, they slowly transformed their short necks to long necks. After generation after generation, they developed this unique identity of having a long neck which was previously developed only to get food from tall trees.

What is Artificial Selection?

Artificial selection is a traditional method for improving livestock and crops. Artificial selection helps to enhance the quality of a trait or whatever desirable characteristics humans need in these traits. Nature has no or little role in this type of selection. Different varieties of animals and plants with desired and economic characteristics can be developed by artificial or selective breeding. For example, chickens which can produce big eggs, cows that produce lots of mils and wheat plants that provide lots of grains.

Artificial selection does not make a species or organism stronger and fit for survival. This process is dangerous and requires the use of advanced technologies because of the higher demands of good quality of vegetables, fruits, and pets such as dogs, cow and buffalo. This type of selection occurs over many generations and requires many steps. The general steps of artificial selection are: to decide which traits are essential to select, choose parents that show these traits, choose the best offspring from the parents to produce next generations and repeat this process continuously.