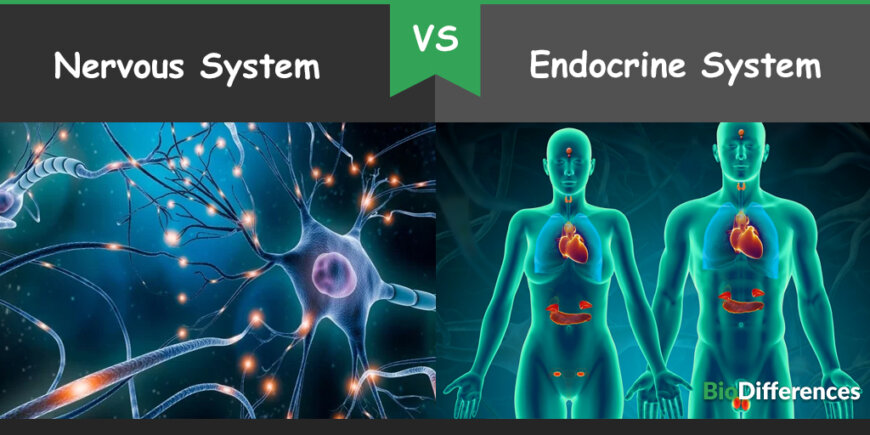 Both nervous and endocrine systems allow communication between the cells, tissues, and organs. These systems have the responsibility to control and coordinate the signals given to the body, internally or externally. This regulation aids in maintaining the homeostasis and other activities of the system.

It is important to know that both systems are regulated by the negative feedback mechanism. Though their major mode of transfer and time differs but the chemical messengers play a major role in both systems.

What is the Nervous system?

The nervous system is the primary control system of the body. This system has numerous nerve cells, which are found in the brain. The spinal cord acts a vital role in transmitting the signals like a nervous system. The spinal cord works as the main path from where these electrical signals are transmitted from the brain to the outer part of the body.

The brain is situated in the skull and its shape looks like a mushroom. Its weight is about 1.3 to 1.4kg, having neurons and glia. The neurons are the nerve cells and the glia is the supporting cell. The brain has further four parts; the cerebrum, the cerebellum, the brain stem and the diencephalon. The spinal cord is the tube-like part composed of a series of 31 segments and each segment contains a pair of spinal nerves. The sensory nerve and the motor nerve are located in the region of the spinal cord only. The spinal cord is the collection of bones and weighs up to 35 to 40g. Its length is 43 cm in length.

The nervous system helps to control emotions and respond to different things. It happens through the electrical signals that run throughout the body from the brain.

What is the Endocrine system?

The endocrine system includes a network of glands that secrete chemicals in response to the stimuli. Hence the hormones are also called the chemical messengers. The endocrine system releases hormones to evoke the response from the target cells. These hormones are secreted by the special glands at near-by or distant from their target cells. Then, they gradually travel through the blood or other intercellular fluids.

The endocrine system comprises about 21 glands. Major glands are the hypothalamus, pituitary gland, thyroid and parathyroid gland, and pineal gland. The kidneys, pancreas and the adrenal gland are found in the stomach, whereas the ovaries and the testes are present in the abdominal region of the body. These glands perform different important functions to regulate homeostasis. The study of psychology and endocrine systems is called behavioral endocrinology, which is the scientific study of the interaction between hormones and behavior.

By maintaining the functions of the body, these glands help in regulating homeostasis. For example, pituitary glands secrete growth hormones that are responsible for the growth of the body, especially in childhood, but along with that heart rate, cellular metabolism, and breathing are also maintained simultaneously.