Planktons are the small and microscopic organisms drifting or floating in the sea or freshwater consisting chiefly of diatoms, protozoans, small crustaceans and the eggs and larval stages of larger animals. Planktons are divided into two categories. One category is of permanent plankton and the other is called as temporary plankton. Diatoms, radiolarians, foraminifers, krill, dinoflagellates, copepods and sales are permanent planktons, whereas stars, crustaceans, marine worms, sea urchins and mostly fish are temporary members. These are the larval forms, which are also called as meroplankton. 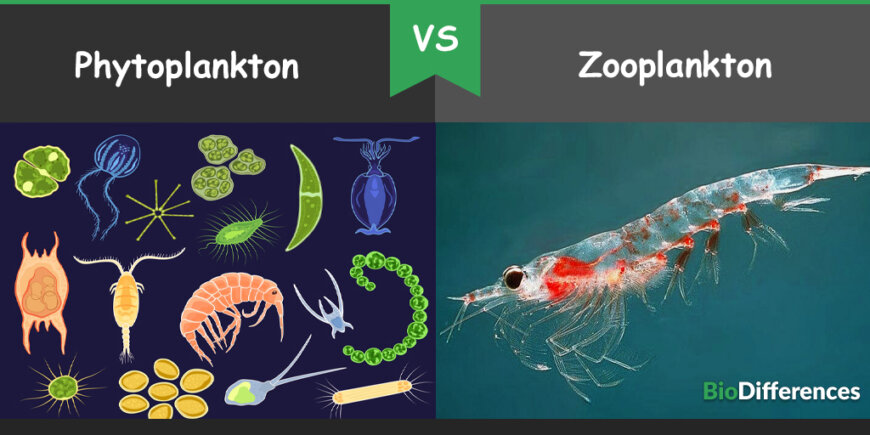 All the species of the plankton are adapted to certain structural adaptations which enable them to float freely in the water. These adaptations are oil droplets, sheaths, lateral spines, gel-like sheaths, floats filled with gases and flat bodies.

Phytoplankton is also called microalgae. These are microscopic biotic organisms that are mostly found in water bodies such as oceans, lakes, ponds and rivers. Synechococcus is the example of the common planktonic genus and its density reaches almost 104 to 105 cells per millimeter. Picocyanobacteria is a very small cyanobacterium that represents about 20 to 80% of the total phytoplankton.

Phytoplankton play a role as the primary food source for many marine animals. In most marine and freshwater environments, photosynthetic prokaryotes and eukaryotic organisms form the basis of primary production. They dissolved and particulate organic matter is released by the phytoplankton and is further used by the heterotrophic bacteria. A part of this dissolved material is consumed by the predators, which also releases the material and is used eventually by the phytoplankton. But iron and nitrogen can limit these activities in the marine environment.

They are also used as indicators of the health of marine water. The overgrowth of the algae bloom indicates the high level of the presence of toxins. These algae are also known as Red Tides and result in the death of marine animals and fish in that specific water body and thus creating the dead zone.

Dinoflagellates and diatoms are two main classes of phytoplankton, which play a major role in the global carbon cycle. Most importantly, phytoplankton is producing half of the world’s oxygen.

Zooplankton is a small animal that swims in the water bodies. Zooplankton is further divided into different groups based on their size and developmental stage. Their size ranges from less than 2 µm to 200mm. Almost all the members of kingdom Animalia, such as Protozoa, Cnidarians, Arthropoda, Molluscs, Echinodermata and Chordates are considered zooplankton.

Zooplankton shows a very different feature called vertical migration in which at the night time, they move toward the surface of the water and in the day time, they move down to the deep water. This process protects them from predators, especially diurnal and also supports the phytoplankton to produce their food in the presence of sunlight. This migration depends on the season, size and sex. Zooplankton is also affected by the calcium, pH, aluminum and heavy metals.

Zooplankton is ecologically important organisms that are an integral component of the food chain. These organisms serve as an intermediate species in the food chain. They transfer energy from the plankton algae to the large invertebrate predators and fish that eventually feed on them.

Zooplankton is also an indicator of toxicity levels in the marine waters. If there is a sudden change in the level of pollution, acidity, or temperature, the zooplankton will eventually act as a sign of reference.