The cells perform millions of biochemical reactions in one full minute for them to replicate for the propagation of life. Cellular functions may seem to have some complexities. Endocytosis is also a complex cellular function that was given by Christain de Duve in 1963. Pinocytosis and phagocytosis are types of endocytosis. Both terms refer to the intake of material through the plasma membrane by forming vesicles, which are membrane-bound droplets located in the cytoplasm of the cell. Endocytosis takes place in the animal cell and very rarely in the plant cell as the plant cell is bounded by the cell wall, which causes interruption in the invagination of the plasma membrane. 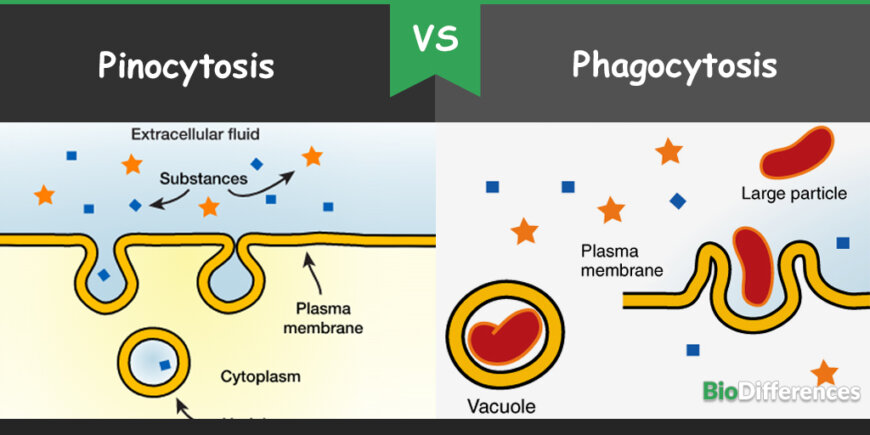 Pinocytosis means cellular drinking, whereas phagocytosis means cellular eating. Pinocytosis and phagocytosis are active processes and require energy as adenosine triphosphate for the uptake of materials. Pinocytosis is an intake of liquid particles with the formation of vesicles called pinosomes, whereas phagocytosis is the intake of solid particles with the formation of vesicles called phagosomes. In both cases, endosomes are developed, which is an invagination of the plasma membrane to develop vesicles. These vesicles find the engulfed particles, which can be solid or liquid.

Exocytosis is the opposite process of endocytosis. In exocytosis, substances are being allowed to move out of the cell by a mechanism that is similar to endocytosis and common in secretary cells.

Pinocytosis is also called cell drinking. It is the intake of small particles and liquid. Mostly, enzymes, hormones, amino acids, insulin, sugars, lipoproteins are ingested through pinocytosis. Pinocytosis is not substrate-specific and cell takes all kind of surrounding fluids with all solutes present. This process is usually used for taking in extracellular fluids. Cells of the intestinal wall that have microvilli also use pinocytosis for the intake of the nutrients.

Phagocytosis is also called cell eating. This word has derived from the Greek language in which “phago” means “devouring,” and “cyte” means “cell,” and in this process, the particles which are ingested are larger so enzymes are required for digestion. Phagocytosis occurs in single-cell organisms such as amoeba, protozoans and higher animals. In humans, it occurs in white blood cells, such as in neutrophils and macrophages. This cellular process is used for the defensive purpose to engulf foreign particles, harmful viruses, bacteria and other waste materials.

In this process, feet like structures called pseudopodia are formed, which extend to swallow up solid particles to be taken into the cells. Plasma membrane surround and fuses with the particles to be taken into the cells where vesicles are formed, which are called phagosomes. These phagosomes, along with the lysosomes lebirate digestive enzymes, which are helpful in the digestion of the phagosomes. At the end of phagocytosis, the cellular waste that can not be reused is discharged from the cell by the process of exocytosis.

In conclusion, pinocytosis and phagocytosis are biochemical processes of the cell in which particles are ingested for a different purpose. Both differ from each other based on vesicles formed, type of particles engulfed and in some other aspects.