The cell is the functional unit of all plant and animals body. Both plants and animals are made up of multiple cells. Both possess eukaryotic cells so they have numerous similarities in their cells for example possession of cell membranes and other cell organelles. But plant and animal cells also differ from each other in many aspects. 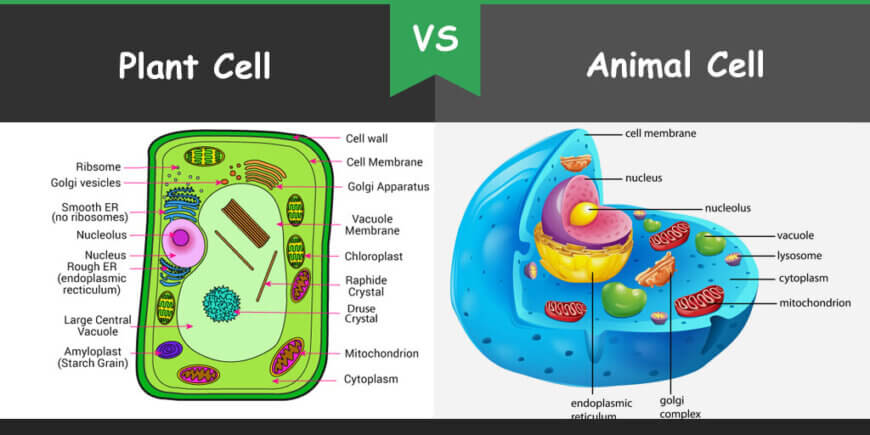 What is Plant Cell?

Chloroplasts are very prominent organelles present in the cell wall. They carry out photosynthesis and convert carbon dioxide, water, and sunlight into nutrients. Chloroplasts are oval in shape and possess stroma between the outer and inner surfaces. Chloroplasts possess flattened disks like thylakoids with a high quantity of chlorophyll and carotenoids which helps in capturing light. The green color of plants appears because of chlorophylls.

Plant cells are unique because of having a large central vacuole. It is a small sphere that contains ions, fluids, and molecules. It helps to maintain the turgor pressure which is generated when the cell pushes the cell contents against the cell wall.

Besides cell wall, chloroplast and a large vacuole, plant cells contain a nucleus, plasma membrane, Golgi apparatus, mitochondria, endoplasmic reticulum, ribosomes, peroxisomes, glyoxysomes, flagella, plasmodesmata, and cytoplasm. Each organelle performs a specific function. The nucleus of plant cells contains DNA  for instructions of different functions of the plant body. It also maintains the growth and division of the cell. Proteins are made of in ribosomes, folded and processed in the endoplasmic reticulum and stored in the Golgi apparatus. Mitochondria is the powerhouse of the cell and produce ATP through cellular respiration.

What is an Animal Cell?

The animal cell also possess different organelles such as the nucleus, cell membrane, ribosomes, endoplasmic reticulum, Golgi apparatus, vesicles, cytosol, cytoskeleton, and each organelle performs a specific function for the cell. Genetic material is present in the nucleus which controls the synthesis of proteins and all activities of the cell. DNA is located near the region where ribosomes are formed. Nucleus is surrounded by the membrane which is called nuclear membrane.

Ribosomes are synthesized in the nucleus and help in the formation of proteins. DNA which codes specific proteins creates copies onto the mRNA chain. mRNA chain travels to the ribosome via transfer RNA and makes proteins. In animal cells, ribosomes are present freely or attached to the membranes. The endoplasmic reticulum is a network of membranes that modifies and transports the synthesized proteins. These membranes are of two types; smooth and rough endoplasmic reticulum. The rough appearance of the reticulum is because of attachment of ribosomes on the membranes whereas smooth ER does not have ribosomes.

Vesicles are small spheres composed of the lipid bilayer. These are used for transporting molecules throughout the cell from one organelle to another and help in metabolism. These vesicles contain enzymes that aid in the digestion of all types of molecules in the cell.

Golgi apparatus is made up of cisternae and performs the function of protein storage. It receives proteins from the endoplasmic reticulum and packages them into vesicles. Mitochondria perform the function of cellular respiration in which sugar and fats are broken down and energy is released in the form of ATP.

The cytosol is the liquid that is present in the cell. Cytosol with all organelles present in it is called cytoplasm. It contains all ions and water with pH 7. The cytoskeleton is another organelle of the animal cells. It is a network of filament and tubules found throughout the cytoplasm and gives the cell shape, provides strength and plays a role in cell signaling. These filaments are of three types; microtubules, microfilament, and intermediate filament.

The entire cell is surrounded by a membrane which is called the cell membrane. It is a double membranous structure composed of phospholipids. Cells exchange ionic and other material through this membrane. It also gives shape to the cell.

In sum, although both plants and animals possess eukaryotic cells which have some common characteristics, they differ from each other in many aspects.

2 thoughts on “Difference between Plant Cell and Animal Cell”