Blood is the fluid circulating in the body through veins and arteries. It is a very important part of the body’s immune system because it supplies oxygen to the tissues and takes the carbon dioxide out of the tissues. It also provides nutrients, hormones and electrolytes to the cell. Blood is composed of the red blood cells, white blood and platelets, which are floating in a liquid known as serum. Blood makes up 80% of the total body weight. So, blood acts as connective tissue having the liquid matrix carrying the cells and another liquid part. 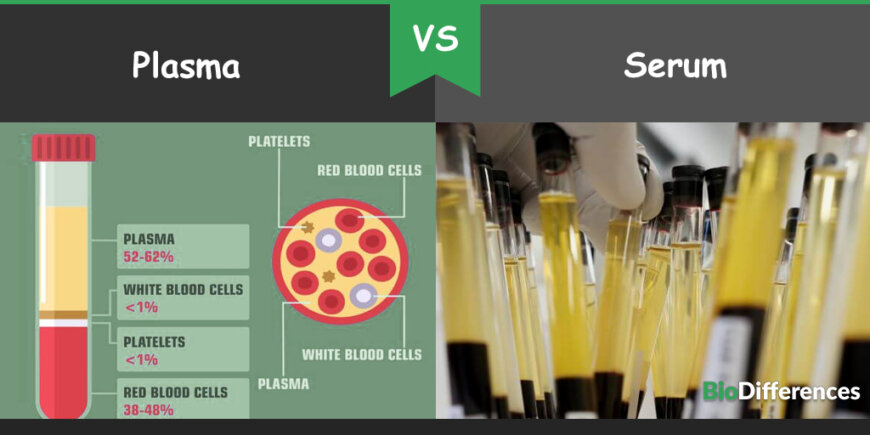 Plasma is the liquid of the blood where the components like cells, nutrients and hormones float. The plasma covers more than half of the volume of the total blood. Plasma contains fibrinogens, which are clotting agents and helps in preventing the excessive flow of blood in case of injury. When the blood sample is spun at a specific speed in a centrifuge, the upper layer is gained in the blood sample is called the plasma. The composition of the plasma includes albumin, globulin, gases, hormones, nitrogenous waste, amino acids and nutrients.

Plasma also contains proteins that are helpful in the transportation of materials through the blood to different parts of the body, such as glucose and other nutrients. Plasma also helps in the maintenance of the body temperature and in regulating the blood pressure. The blood also used in the transfusion, particularly in the case of hemophilia, burns and immunodeficiency. Plasma is separated from the blood to increase the longevity up to years and can be easily carried from one place to another.

For the separation of plasma from the blood, one has to add an anticoagulant agent in the small amount of blood sample in a test tube and then set on the centrifugation. The components of the blood will be separated based on their weight and density. Three layers will be formed. The lowermost part will be red blood cells; the middle layer will be white blood cells and the topmost layer will be plasma, which will be more than half of the volume of the total blood plasma. Plasma contains 90% of water, 8% of the proteins and 2% regulatory proteins, nutrients, electrolytes, hormones, nutrients and gases.

There is another part of the blood beside the plasma, which is called serum. The serum is the fluid part of the blood and does not contain the blood cells and blood clotting factors. It has proteins, antibodies, antigens, hormones and electrolytes.

Serum samples are used in the diagnosis of different diseases such as cholesterol, blood pressure and sugar. Its study is called serology.

For the separation of serum from the blood, one has to take a small amount of blood sample in a test tube and then set on the centrifugation. An anti-coagulant agent is not added. The components of the blood will be divided into two layers after 3o minutes. The upper layer will be serum and the lower layer will be the clotted blood.

All the components of the blood are the same as that of the plasma, such as water, electrolytes, vitamins, nutrients, hormones and gases, but it lacks the fibrinogens. This is the major difference in plasma and serum.

In conclusion, both plasma and serum are components of the blood but differ in their composition. Plasma contains blood cells and clotting factors, whereas serum is the fluid part of the blood.