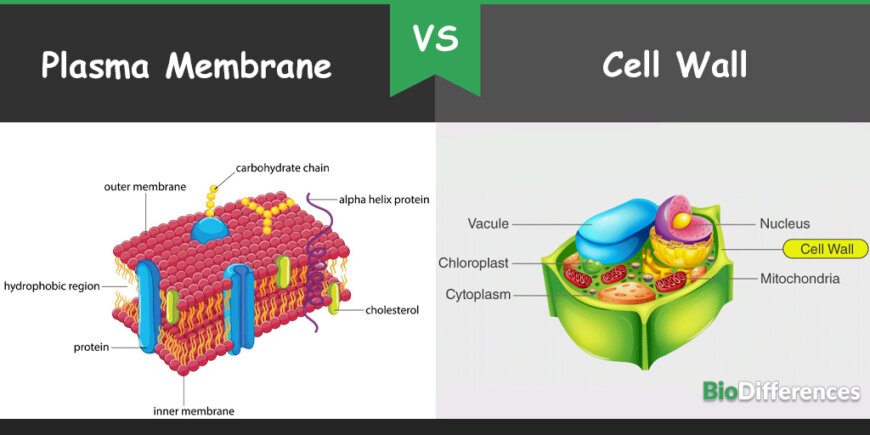 The plasma membrane is a delicate thin layer. It allows the small molecules entry only as it is selectively permeable, whereas the cell wall is the thick and rigid layer and does not allow to pass any molecules.

What is Plasma Membrane?

The plasma membrane is also called the cell membrane of the plasmalemma. It is found in all types of cells and around each organelle of the cell. It is selectively permeable and does not allow all types of material to enter the cell. Hence it is known as semi-permeable as it will enable to pass very selective molecules.  This is the reason; it is known to control the traffic of the molecules inside the cell and maintain the internal structure of the cell.

The cell membrane performs several important functions for the cell. It is present below the cell wall. If the cell wall is not present, the plasma membrane acts as the outer layer and provides support, integrity and shape to the cell. It is responsible for maintaining the constant internal environment in the cell cytoplasm.

It also provide a vital function in cell signaling and communication. The plasma membrane uses the receptors present on the outer layer of the membrane for the cell to cell communication. These receptors and channels allow specific molecules (ions, nutrients, wastes and metabolic products, etc.) to pass through the organelles and between the cell and the outer environment.  The cell membrane also helps in regulating cell growth through the balance of endocytosis and exocytosis.

What is Cell Wall?

The composition of the cell wall varies in different organisms. But its main composition is the cellulose, long fibers of carbohydrates including hemicellulose, lignin and pectin. All cell walls contain two layers, the middle lamella and the primary cell wall. But some cells produce an additional layer called a secondary layer. The cell wall of the plants has cellulose as the major component in its composition, the fungal cell wall has chitin and the bacterial cell wall is made up of peptidoglycan.

The cell wall performs several significant functions. It defends the cell against physical damage and invading pathogens. It also regulates and controls the direction of cell growth. The cell wall also provides the strength, structural support and maintenance of the shape of the cell. It also functions as a storage unit by storing carbohydrates for use in plant growth, especially in seeds. Like cell membranes, it also acts as a selectively permeable membrane by allowing the entry of the small molecules to pass through it.

In conclusion, the cell membrane and cell wall perform somewhat the same functions, but they differ from each other in structural composition and presence in different types of cells.