Every organism depends on the plants either directly or indirectly. So, for the continuation of life would not have been possible without the presence of plants. Flowering plants also reproduce by sexual reproduction like other organisms. Plants mainly reproduce in two ways to forward their characters to the next generations and to increase their population size. 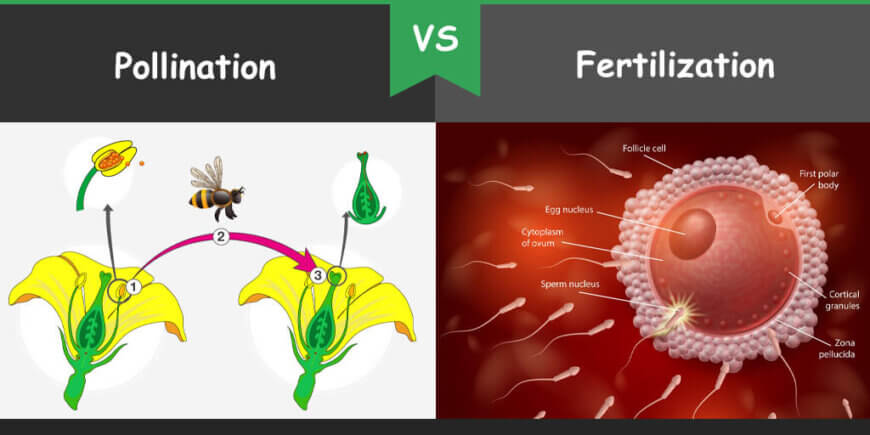 Pollination is the process of germinating pollen on the stigma. In this process, pollens are transferred from the male organ to the female organ of the same or different flower. The male organ of the flower reproductive system is called anther in which pollen grains with genetic materials are produced. Anthers are present on the tip of a stalk known as the stamen. The female reproductive part of the flower is called the stigma which receives the pollen grains. Stigma is located at the tip of the female organ, pistil. This helps in sending the sperm cell from the stigma to the ovary which has the eggs or ovules.

Cross-Pollination: In this type of pollination, stigma receives the pollen from the other plant of the same species. Cross-pollination is also called allogamy. The genetic material of the two different plants is combined in cross-pollination which results in genetically varied offspring to parents. This type of pollination is used in increasing the variety of plants especially fruits, vegetables and flowering plants. External factors play a role in the transfer of pollen from the anther to the stigma such as butterflies, insects, moths, winds, animals and birds.

In fertilization, there is the union of sperm and egg which is the mechanism for pollination. Each sperm and egg has half of the hereditary material which unite to develop a new plant. When a pollen grain come in contact, a small tube is generated along with the sperm. This pollen tube gets fit into another pipe-like structure known as the style of the female pistil. This pollen tube expands from the style to the opening of the ovary where the sperms get collected. When the sperm and egg get united completely, the egg fertilizes and develops into a plant seed, which is a zygote. This process of fertilization takes place inside the flowering plants.

Double fertilization is a very distinct process that occurs in the flowering plants also known as angiosperm. In this type of fertilization, out of two sperms, one fertilizes the egg to form the zygote while other sperm combines with the secondary nucleus to form a triploid nucleus. This is also known as the primary endosperm nucleus. Hence in this process, the fusion of the two male gametes with different nuclei of the embryo sac is called double fertilization. The fertilized egg becomes the zygote which develops into an embryo.

Key Differences between Pollination and Fertilization

In conclusion, Pollination and fertilization are reproduction processes in the flowering plants. Both are entirely different processes.