The ecological or biological succession can be defined as a natural or gradual process of the development of the biotic community. Such development may take millions of years. This process starts with the growth of a pioneering community which may be bare rock, the lichens, and a few plants. The next step is the development of the intermediate species, which has the grasses, trees, shrubs, etc. The last stage is the climax community which got developed into the oak and hickory types of shade-tolerant trees. 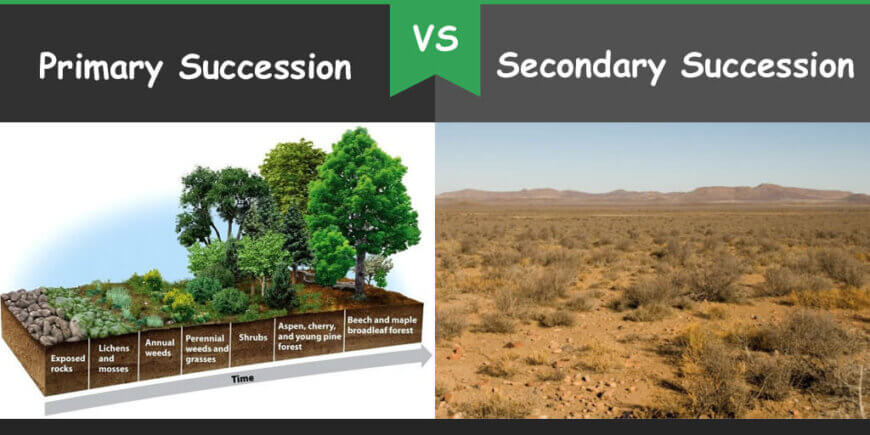 Primary succession is the process of growth in an area that was previously uninhabited, barren, unoccupied, and there was no initial vegetation. On the contrary, Secondary Succession is the growth of the community in such an area which was previously occupied inhabited and that has the primary plant but got damaged or disturbed due to some internal or external environmental factors.

What is Primary Succession?

Primary succession is the beginning stage of the development of any community. As it begins growing from the area where there is no suitable ambience for sustaining life. Gradually, as the advancement goes on and a developed community has formed. This evolution is so slow that it takes thousands of years. Primary succession is the first form of life in any environment, whether is terrestrial, marine or freshwater. The plants which establish themselves in the initial stage are called pioneers and community is called the primary community. Lichens and algae are a typical example of this succession.

Hawaii is a classic example of initial success. It has active volcanoes, so new land is continuously being formed. As the volcano erupts and lava cools, the land near the volcano keeps expanding. The newly formed area has no soil, vegetation or animals. This is how the primary succession begins. With the time passage, dust and debris settle on the newly formed land. Pioneer species will start to inhabit the area. As that species will complete their life cycle and continue to reproduce and die, the land will be enriched with nutrients because of the bodies of died species. As the soil becomes enriched, it will be able to support more complex plants. More complex plants will eventually attract insects, snakes, birds, and other animals to the newly formed community.  In this way, a barren and lifeless area will transform into an established and complex forest community.

What is Secondary Succession?

Oak and hickory forests cleared by wildfire exhibit a classic example of secondary succession. Wildfires will burn most of the vegetation and kill animals. But nutrients will be returned to the soil in the form of ash. A disturbed area already enriched with nutrients can be colonized more quickly than the bare rock and barren area of primary succession.

After many years, due to least in part to changes in the environment caused by the growth of grasses and other species, shrubs will appear, followed by small oak and hickory trees. Gradually, oak and hickory trees will become dominant, and the original community will be returned. This process will take almost 200 years for completion. Stages of the secondary succession are similar to primary succession.  Pioneer species arrive in the cleared area, slowing give way to intermediate species over many years and then climax community has established.

In conclusion, ecological succession is a serial progression that ultimately evolves new species. These changes at the last stage of climax condition produce a stable community for a particular species. Hence, primary and secondary succession is necessary for the establishment of a productive environment with ecological balance.