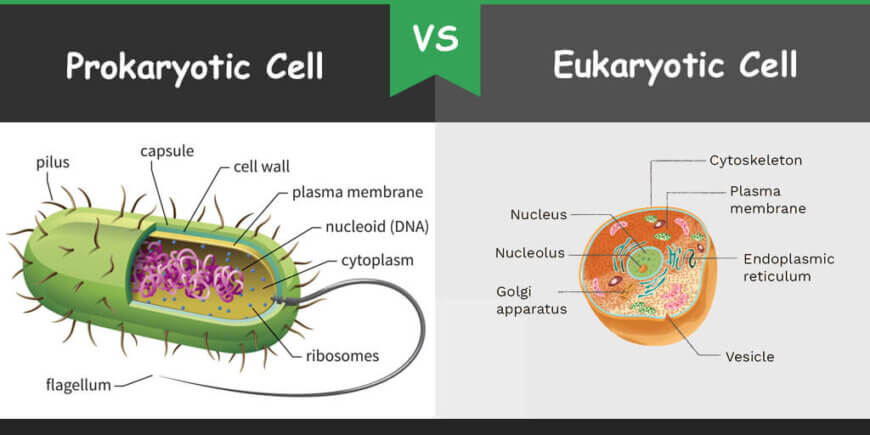 “Eu” means “new” and “kayron” means “nucleus”. Eukaryotic cell was discovered 2.7 billion years ago. Eukaryotic cells are the advanced kind of cells that are present in most plants and animals and fungi. These cells have a well-defined nucleus and possess different organelles for performing different complex functions.

What is Prokaryotic Cell?

Glycocalyx is a layer that functions as a receptor and also acts as a cell wall. Nucleoid is the condensed DNA packet material. Pilus is the hair-like hollow structure that is used to transfer DNA to other cells.

Flagellum is the structure which helps in movement. Extension of the cell membrane is called mesosome which helps in cellular respiration. The cell wall of the prokaryotic cell provides support and rigidity to the cell.

Fimbriae are other hair-like structures that help in attachment with other cells during mating. Some granules are also present in this type of cell which helps it to store carbohydrates, phosphate, glycogen, fats in the form of small particles for later use.

Ribosomes are tiny particles that help in protein synthesis. Cell membrane of prokaryotic cells is made up of proteins and lipids which surround the cytoplasm. Cell membrane helps the flow of material inside and outside the cell. Endospore helps the cell in surviving during harsh conditions.

What is Eukaryotic Cell?

Eukaryotic cells have various structures such as the nucleus, cytoplasm, appendages, cell wall, cell membrane, ribosomes and cytoskeleton. Nucleus of eukaryotic cells is clearly defined with nuclear membrane. The genetic material of nucleus helps in the production of protein synthesis and ribosomes.

Mitochondria make ATPs and are called powerhouses of the cell. Chloroplasts are present in certain algae and plant cells and involve in photosynthesis. Golgi apparatus are disc shaped sacs which are lied on each other. These sacs help in the packaging of cell material and secretion at the places where is required. Golgi apparatus form lysosomes and vacuoles which are involved in intracellular digestion with the help of enzymes. Vacuoles perform endocytosis for the cell.

Endoplasmic reticulum is of two types of smooth reticulum and rough reticulum and helps in the transportation of proteins, lipids and other material. Cilia and flagella are appendages that help in locomotion towards positive stimuli. Cilia are numerous and shorter than flagella. Glycocalyx of the eukaryotic cell is composed of polysaccharide, present on the outer surface of the cell. It aids in cell adherence, protection and sending signals to other cells.

Cell membrane or cytoplasmic membrane is a thin layer surrounding the cytoplasm. It provides protection to the entire cell and regulates the material movement inside and outside. It is composed of phospholipids embedded in proteins. It is the outermost layer in animal cells whereas in plants cell, it is surrounded by tough cell wall. Cell wall provides support, rigidity and shape to the cell.

Cellulose, chitin, pectin or peptidoglycan is its composting materials. Eukaryotic cells have 80S ribosomes which are tiny in nature and help in protein synthesis for the cell. Cytoskeleton is also the supporting framework of a eukaryotic cell. It is of two types; microtubules and microfilaments. Microtubules are made up of a protein called tubulin and have a diameter of about 24 nanometers. Microfilaments have a diameter of 6 nanometers and are composed of actin protein. These are the largest filaments while microtubules are the smallest units.