Fats are an essential part of the daily diet. Although one type of fats is detrimental to our health, our body needs a specific amount of it. It has many benefits such as it helps us to absorb vitamins and minerals, increases satiety, build cell membrane, aid muscle movements, improves the taste and enjoyments of food, supports nerve health and contributes in the process of inflammation to protect the body from the contaminants.  The words fats and fatty acids are used interchangeably. 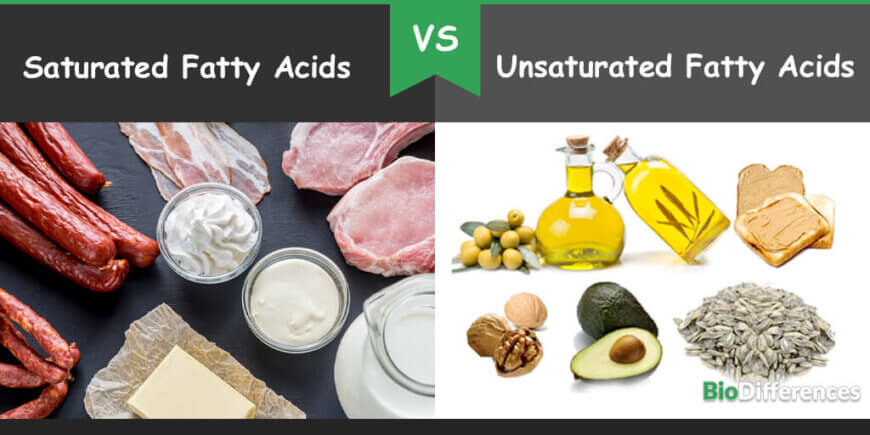 Fatty acids are actually the carboxylic acids with the side chain of hydrocarbon and also the simplest form of lipids. These lipids are concentrated chief fuel reserves of the body. Lipids are not polymers; they are small molecules and are the heterogeneous group of compounds. The most characteristic feature of the lipids is their insolubility in water.

What are Saturated Fatty acids?

The health hazards of high intake of saturated fatty acids can depend on the type of food source containing these. For example, the processes of meals can enhance the risk of cardiovascular diseases, whereas dairy may decrease it.

What are Unsaturated Fatty acids?

Unsaturated fatty acids have both single and double carbon bonds.  But this type is characterized by the presence of at least one double bond in the chain. These fatty acids are mostly obtained from a plant source. Avocado and fish oil are other types. These are in liquid form at room temperature.

In conclusion, saturated and unsaturated fatty acids are types of bad and good fats that are essential for the body. Both types differ from each other in many aspects.