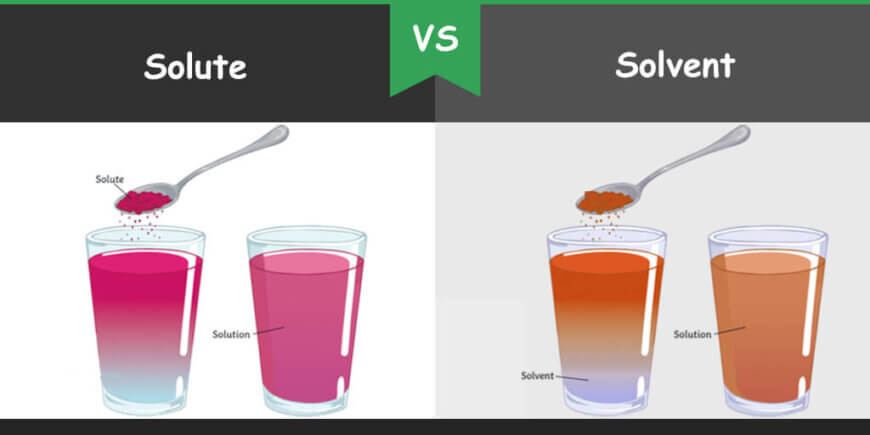 Solutions are studied and prepared in chemistry and research field for different purposes. Similarly, there are many products which are used in daily life in solution form such as soaps, medicines, tea, coffee, juices etc. There are examples of physiological solutions such as isotonic, hypertonic and hypotonic solutions in which salt are the solute and water is the solvent. These solutions are studied in medicine and pharmaceutical sciences regarding the physiology of the human body.

Physical and chemical properties of solutions depend on the solute. When a solute is added in the solution, properties are changed accordingly.  Sometimes, a solvent may be made up of two or more solutes. When a water-soluble ionic compound or substance is mixed in water, this compound gets separated into its aqueous ions. Then this ionic compound is the solute component of that solution. When a covalent is added in a solution, it is separated into its molecules.

A solvent is a liquid in which different substances can be dissolved to form a solution. Solvent is the major component of a solution. Solvents capture the major part of the solutions and mostly of liquid form. Properties of the solvent determine the type of solutes that can be dissolved into it. Solvents can be of polar and non-polar solvent. Polar solvents are made up of polar molecules and can dissolve polar substances whereas non-polar solvents are made up of non-polar molecules. So, solvents follow a universal rule of solubility “like dissolves like”. The physical and chemical properties of a solution are usually different from the solvent found in it. Solvents can be colorful or colorless. Some solvents can be flammable and others can be inflammable. Some solvents evaporate immediately whereas other solvents have less evaporation ability. Similarly, solvents can be classified into organic and inorganic solvents. Solvents which contain carbon element in them are organic solvents where inorganic solvents do not contain carbon element. Gasoline, xylene, benzene, alcohol and acetone are some organic solvents which are widely used in chemistry experiments and industries. Water is universal solvent and commonly used in daily life. It has the ability to dissolve any type of substance such as gas, liquid or solid.

Solvents are used for different purposes and for performing different functions. These are used to regulate the temperature of solutions, either to absorb the heat produced during a chemical reaction or to increase the speed of the reaction with the solute. In organic chemistry laboratories, purification of a substance through recrystallization is a common technique. In this method, impure substance in a solvent and that solvent dissolves only substances that need to be purified. Impurities are removed through filtration. Therefore, to determine the best solvent for recrystallization is very important in this experiment.

Key Differences between Solute and Solvent

Both solute and solvent are parts of solutions which are used in everyday life and studied in chemistry, medicine and for research purpose. So the difference between solute and solvent and their properties is very significant for chemists and researchers.