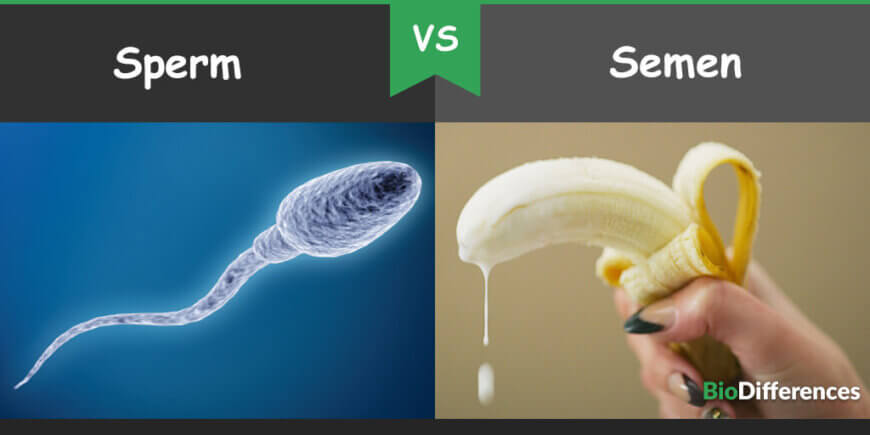 On the contrary, semen is the seminal fluid that is a whitish and viscous liquid released from the penis. This fluid contains sperms and other seminal plasma liquids which ensue viability of the fluid. Each ejaculation contains almost 2 to 5% volume of semen that immerse the sperms and sustain their mobility.

Sperm or spermatozoa is known to be the male gamete or sex cell which looks like a tadpole. A human male body produces almost 150 million sperms a day. Its mean, a male is producing a few thousand sperm every couple of second. Mostly sperms produced by the male’s body are useless as each sperm does not fertilize the egg. Sperm has to swim towards the egg to fertilize it. Only a few sperms from the semen can swim to reach the egg and up to 70 to 90% are not ideally shaped for swimming.

Sperms does not start to form in a human body until he hits puberty. By that time, the body’s immune system has already decided which type of cells are part of the human body and which are not. Sperms are semen are protected from the immune system and the body does not attack it as a foreign substance. Sperms differ on the basis of different factors such as lifestyles of personals and culture.

Head has tightly twisted chromatin fibers and a nucleus which is surrounded by acrosome which contains enzymes for dissemination of the female egg. The midpiece of the sperm has a centrally placed core made of filament that is abounded by numerous mitochondria necessary for ATP fabrication for the drive through the female cervix, the uterus and uterine tubes. The tail of the sperm is also known as the flagellum which plays a lashing movement to propel the spermatocyte ahead

Semen is a white, slightly grey or yellow in color. If the ejaculated semen has blood due to some infection, injury or blockage then the color may be a little pinkish or reddish. Ejaculated semen usually turns little sticky or jelly-like after a span of time and after some time turns into the watery fluid. The basic components of semen are sperms, amino acids, prostaglandin, citric acid, enzymes, fructose, proteins, flavins, vitamin C, phosphorylcholine, phosphatase, zinc, mucus, prostate-specific antigen and sialic acid. Semen analysis tests are done to check the infertility in males in which semen and its constituents are analyzed.

Semen analysis is also called seminogram. This test analyzes the characteristics of semen as well as its sperms. The semen analysis test is the first diagnostic test done to evaluate the male fertility or infertility in the couples who are trying to conceive.

This test analyzes the external characteristics of the sperms such as count, motility and shape in addition to evaluating the volume of the sample provided, pH of the sample and other constituents. Other indications of this analysis test include testing the donor for sperm donation, to check for azoospermia, also as a part of routine pregnancy test and in some pathology cases.

Key Differences between Sperm and Semen