Locomotion and movement are the essential features of all organisms, whether they are unicellular or multicellular. For this action, there is a specific type of tissues known as muscular tissue. The cells of muscular tissue are called muscular cells. The muscular tissues are formed from the embryonic mesoderm. All muscular tissues and cells work accordingly to support the movement of the body and all parts. The primary function of the muscular tissues is to provide movement to the body but it also maintains the body posture and circulation of blood in the vascular system. 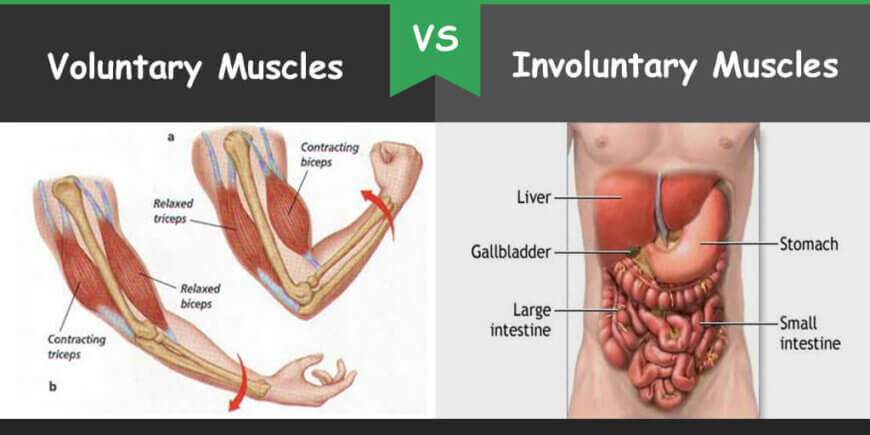 The muscular system of the human body includes more than 700 muscles and comprises 40 per cent of the total body’s weight. These muscles are attached to bones, blood vessels and internal organs of the body. Muscles are of different types based on the structure and movement. Skeletal muscles, smooth muscles and cardiac muscles are three main types which are further classified into two main classes on the basis of their control; mechanism; voluntary muscles and involuntary muscles.

What is a voluntary muscle?

The bundles of muscle fibres are bounded by the sarcolemma which has sarcoplasm and sarcoplasmic reticulum. Sarcolemma has two layers; plasma membrane and basement membrane. It is a transparent membrane and surrounds the muscle fibres. Sarcoplasm resembles the cytoplasm of the cell and present in the muscle fibre known as sarcoplasm. Syncytial is the nuclei present below the sarcolemma and has an oval or flat shape. There are many other organelles are present such as enzymes, fat drops, mitochondria, endoplasmic reticulum and Golgi apparatus. There are many parallel expanded threads like rods are present in the sarcoplasm of muscle fibres which are known as myofibril or sarcostyles. These myofibrils help in the contraction and relaxation of the muscle.

The entire muscle is covered by the epimysium, which is kind of connective tissue. Each end of the muscles is attached with the bones through tendons. There are dark and light bands present between each running fibre called myofibrils.

What is involuntary muscle?

Involuntary muscles are also known as unstriated or unstriped muscles. These muscles are under the control of one’s own desire. These are present in the walls of the internal organs such as urinary bladder, uterus, stomach, alimentary canal etc. because of this reason also called visceral muscles.

The cells of the involuntary muscles are long, thin and spindle shape but structurally very simple. There is an oval nucleus present in the centre of each cell. The nucleus is surrounded by the sarcoplasm. These are long, thin, parallel filaments present in the sarcoplasm is called myofibrils. These muscles do not exhibit dark and light bands, although action and myosin are present.